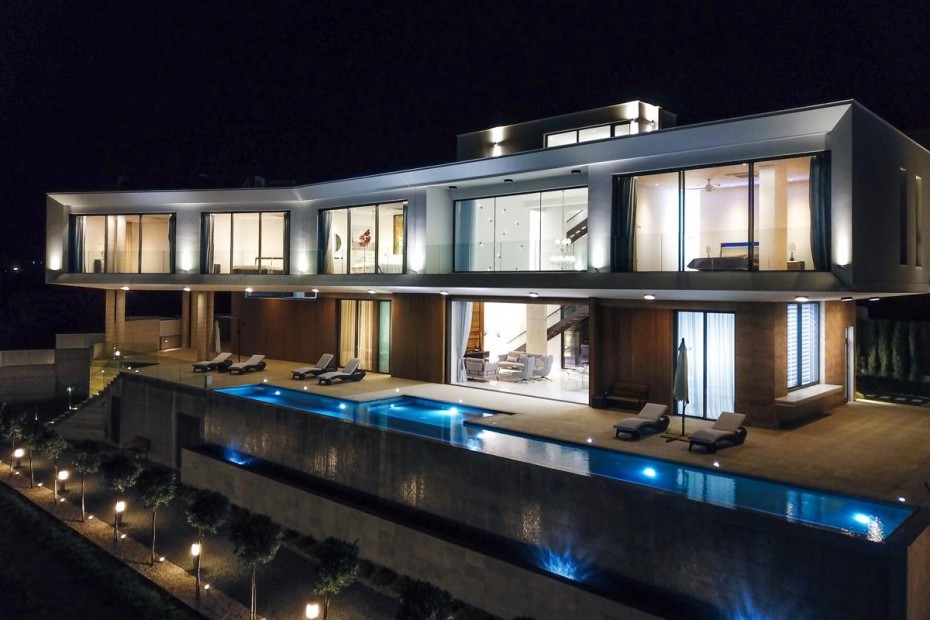 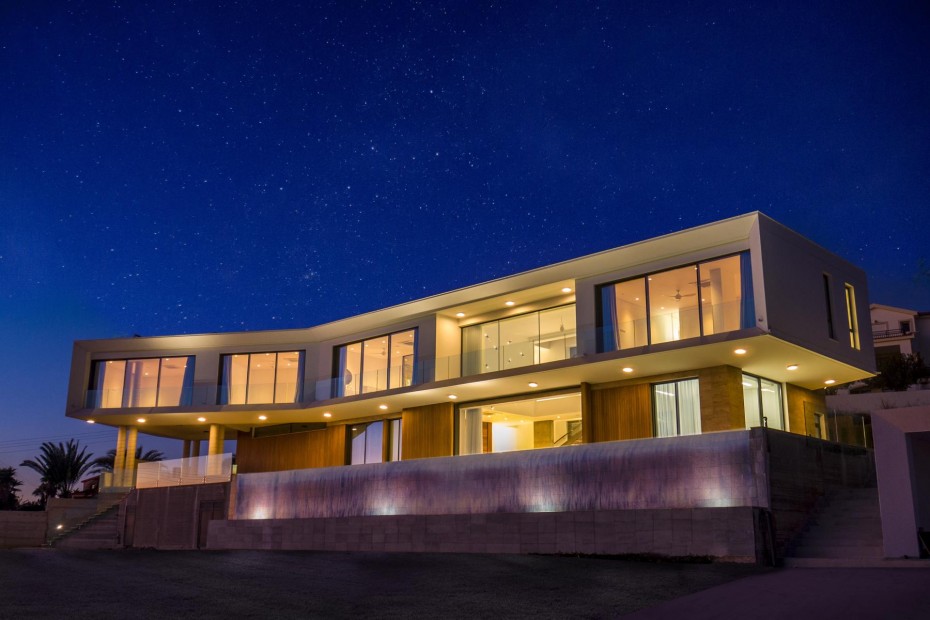 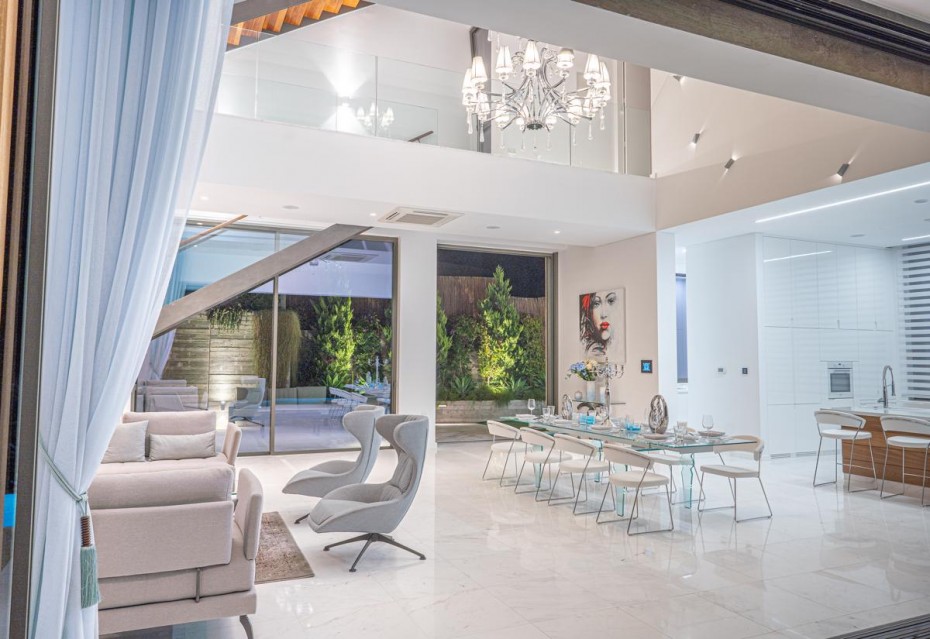 The residence is located 100 meters from one of the most large-scale and ambitious construction projects in Cyprus - a resort and entertainment residential complex Coral Bay Marina, the cost of which is estimated at 600.000.000 euros. Alezone has the largest private land plor at the walking distance from the future Marine and is a unique project in this district. For 3 months in 2017, the houses adjacent to the Coral Bay Marina project were sold at 10,000 euros per sq.m., the land area of each plot did not exceed 500 sq.m.

· Coral Bay is the elite and most popular resort in the south-west of the island.

· Coral Bay is one of the three territories - applicants for opening a casino in Cyprus.

· In Coral Bay area, the largest offshore oil and gas deposits in the Mediterranean were explored.

gives you an opportunity EU citizenship as a gift!!

is a state-of-the-art design in hi-tech style from the leading European architectural bureau Vardas Studio.

The house is spread to the sea in such a way that all the rooms and bedrooms have a view of the sea
Double-glazed windows in the living room on the two sides, at the opening go into the walls at 100%, combining just three zones - a winter garden, a living room and a patio with a jacuzzi and a swimming pool, which visually increases the space of the living room in several times, making it a part of a unique beautiful landscape.
The original design of the bedrooms simultaneously makes them loggias
All bedrooms are designed as hotel suites - the area of each is more than 30 sq.m., each has its own dressing room, bathroom and a small recreation area.
Sea and mountain views open up from all bathrooms, two bathrooms have glass walls.
The height of the ceilings of the living room is more than 8 meters
There is also a winter garden, which, in fact, is part of the living room, increasing its area in two times.
In fact, the house consists of two buildings separated with anti-seismic seam, allowing to withstand loads that exceed the accepted standards in several times.
The main house does not have a basement and a wall adjacent to the mountain, which completely excludes the appearance of the fungus that is traditional for the island the combination of advanced technology and quality of construction, exceeding the established European standards

The house was built by one of the most reliable developers of Cyprus! The Sarides Bros Construction building company specializes in individual projects, has long-term experience and impeccable reputation among its clients as a diligent builder of quality housing.
Only high-quality materials are used in the construction process! During the construction of the house, without exaggeration, the most advanced building materials from the leading manufacturers of Germany, Japan and Italy were used.
Up to 90% savings on electricity due to the abundance of the solar energy! In order to optimize electricity costs as much as possible, the house is equipped with solar batteries of the latest generation capable of covering from 50% to 95% of electricity consumption thanks to solar energy, depending on the degree of load on the system
Up to 90% savings on water are now possible due to the use of a well ! On the territory of the residence, a 30-meter well was explored and put into operation, which, taking into account the land area, will allow to economize rather significant amount of funds due to, essentially, free water for irrigation.
Structural flaws of the building are excluded! The main building was intentionally erected within 24 months in order to observe the necessary sequence of construction procedures and eliminate any structural flaws.
Double thermal insulation! All facade walls, including the foundation and the roof, have thermal and sound insulation in addition to GOSTs/ State Standards, of such quality that in summer it is not always necessary to use air conditioning and winter heating.
Enhanced strength and seismic resistance of the building! The highest cement grade available in Europe today has been used during the construction of the building. In terms of quantity of metal, the metal frame used in the construction exceeds the requirements of GOST twice.
Advanced and ultra-reliable water heating system! The most advanced German solar water heating equipment ROLF has been installed in the house. All engineering structures have been made of high-strength and high-quality materials. The heating system is capable of withstanding a temperature of more than 100 degrees C in the event of long emergency power outage.
The most advanced double-glazed windows on the market! Almost for the first time in Cyprus, insulated double-glazed windows with a superfine frame and revolutionary glass characteristics from German manufacturer RABLE have been used for the construction of the house, providing one of the highest possible light reflection and energy saving ratios in the market.
Automatic standby heating systems of the latest generation! The building is equipped with two redundant heating systems, gas and electric. Both systems include equipment from the leading Italian manufacturer and are operated including by means of wi-fi.
Sports pool without chlorine with heating and jacuzzi! The swimming pool model is infinity, made according to an individual project, its form is not typical for Cyprus, it was designed for sports activities and includes a Jacuzzi. Mechanisms, filters and all equipment of the last generation of chlorine-free ecological swimming-pools have been provided by the leading German manufacturer PROXIM.
is an impeccably stylish interior design, embodied in quality finishing with valuable materials and branded equipment

According to the idea of the designer - the natural landscape of the land where the house is located, is a diamond and the building is unable to compete with the beauty created by nature, but it is intended to become a framing, concisely emphasizing this centuries-old beauty. Hence follows the concept of interior design of the house, embodied in a combination of three valuable materials - marble, Iroko timber and precious sorts of limestone. In other words, the frame should match the diamond, and this is possible if they have the same nature!
The minimalism is in the heart of the house design, the idea that nothing should distract the residents of the house from contemplating the beauty of the surrounding nature - the banana plantations that separate the house from the coral lagoon and mountains that carefully guard it from winter wind and summer heat.
A more than two-hundred years old olive tree is called to emphasize the connection and combination of the surrounding natural Mediterranean environment with the residence in hi-tech style. The olive tree is the center of the winter garden and is located in such a way that it can be admired from almost all the points of the hallway and living room.
The Winter Garden was designed by George Hristo, a rising star in the field of landscape design, laureate of the European award among young designers. The garden space, in fact, is a part of the living room, the same marble is used in its structure as in the house floors, to say nothing of the designer light that stresses the stylish garden and creates the impression of a closed room.
The formwork of the building facade and the retaining walls of the backyard were made as per a special design technology: while concrete placement, the timber the texture of which had been printed for centuries in the walls, was used
The 20-meter long corridor of the second floor simulates picture gallery with the sea landscapes of Cyprus, painted by the brush of the famous artist Natalia Ioannou.
All built-in furniture has been designed by Vardas Studio designers and produced under their supervision by Andreas furniture, the leading factory of exclusive furniture.
Shower screens and mirrors have also been custom-made and have the brand name ALEZONE.The longest warranty on the island is provided for these items.
All porcelain sanitary ware in the house has been produced by the leading brand in its segment, Villeroy & Boch Co.
All mixers and mechanisms in the house are from Grohe, the leading brand in its segment.
Built-in appliances in the kitchens of the 2017 model are presented by Mile Co., the leading brand in its segment.
The chlorine-free sports infinity pool with Jacuzzi is finished with an exclusive Syrian stone of a rare kind.
The light design in the house is embodied with 100% energy-saving LED luminaries from the Italian company Lumin Arte, a leader in the elite lighting segment. More than 150 light sources have been installed in the house.

ADVANTAGES AND CHARACTERISTICS OF THE SYSTEM

The "smart house" system, installed in the Alezone residence, is built on the modern KNX platform manufactured in Germany and does not require server rooms that demand heavy expenditures for power and maintenance.
This equipment is that of a new generation, incorporating all the revolutionary discoveries of recent years in the field of information technologies, which, in conjunction with the sophisticated design of control panels and switches make the management of a large house simple and convenient.
Matrix Co. has developed the exclusive mobile application "Alezone Home", which, when installed on a mobile phone, allows not only to effect 100% management of the house using a mobile phone, but also to quickly change the configuration of such management according to the specific needs of the owner.
The infrastructure of this "smart house" system is analogous and in case of disconnection of the Internet the direct management of the house does not become vulnerable in any way.
The system integrates all the electrical segments of the house into a single network and provides the following options with a personal smartphone, tablet, or touch panels located in the house:
light control
video surveillance
fire alarm
heating system
air conditioning system
security system
garden irrigation system
Internet, Bluetooth, Wi-Fi
music and other media
door lock control
curtain management
fan control
control of any office equipment with wireless protocols, cookers, coffee makers, vacuum cleaners.
"Alezone Home" application stipulates a simple procedure for updating the software as new technologies and opportunities emerge, which makes this smart home system perpetually relevant.

Allows to save up to 1 million euros on purchase of the project and opens great opportunities for using the residence for business purposes.

Alezone sea residence has been registered with a Cypriot company of the same name ("ALEZONE ltd") that is entitled to use this property, including for commercial purposes primarily, for rent. In the coming years, when the development of Coral Bay Marina including berth infrastructure and transit yachts berthing options is completed, the forecast demand for the renting real estate of such a level will exceed the supply by several times. Even nowadays, similar in basic parameters, the real estate objects in this area have been reserved for rent for 6 months a year at average rent charge of 800 euros per day.